New Jersey > Animal is under my porch, deck or shed > River Otter

How to get rid of an otter den under a building 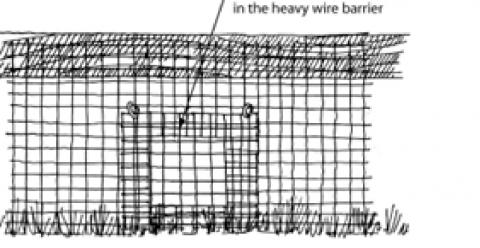 A one-way door can be used in conjunction with a welded wire or hardware cloth barrier.

Occasionally a river otter will find a suitable den site in or under a building. Otters normally occupy a den site for only two or three consecutive nights. However, during the mating and nesting season, females are attracted to warm, dry, dark, easily defended areas, and will remain longer if the setting remains favorable.

1. Seal all openings except the main entrance used by otters. Use sturdy wire mesh (1/4-1/2inch hardware cloth or 1X1, 1X2, or 2X2 welded wire) to screen vents near ground level in houses and other structures. Tightly seal holes in foundations or under porches to prevent otters from entering.

2. To determine entry points, use “tracking patches” of a fine layer of sand, flour, or dust placed at suspected entrances. Wadded up newspaper lightly stuffed into the entry hole also works well. Otters will push the paper out of the way when exiting.

3. After dark, when the otter has left seeking food, it will leave tracks at the den entrance.  Inspect the powder or the dislodged newspaper for exiting otter tracks.

4. Once an otter has left the building, immediately seal the entrance with a hardware cloth “one-way door” (You will not want to permanently exclude at this point, not being sure

of the number of otters present.) The one-way door can be made from ¼-inch hardware cloth that is attached over the opening and hinged at the top and left loose on the other 3 sides. It should be larger than the opening so that it cannot swing inward. The otter will push it open to leave, but cannot re-enter.

5. Put a layer of flour or sand on the inside and outside of the door after the one-way door has been installed for two to three nights. Any footprints should be outside the door with none inside. This means the otter is out. If you have any doubt, then smooth out the dirt on both sides of the door with your hand or a tool, reapply the flour or sand and observe. If after a couple of days there are no footprints, the otter is probably gone. Another way to check is to open the door and shove a few pieces of wadded up newspaper into the otter’s entrance. If the paper stays in place for two to three nights, then the otter is gone.

6. Once you are sure all otters are out, permanently seal the opening.

Adapted from “Living with Wildlife in the Pacific Northwest” (see http://wdfw.wa.gov/wlm/living.htm) Written by: Russell Link, Wildlife Biologist, Design and layout: Peggy Ushakoff, ITAS2 Illustrations: As credited Copyright 2005 by the Washington Department of Fish and Wildlife